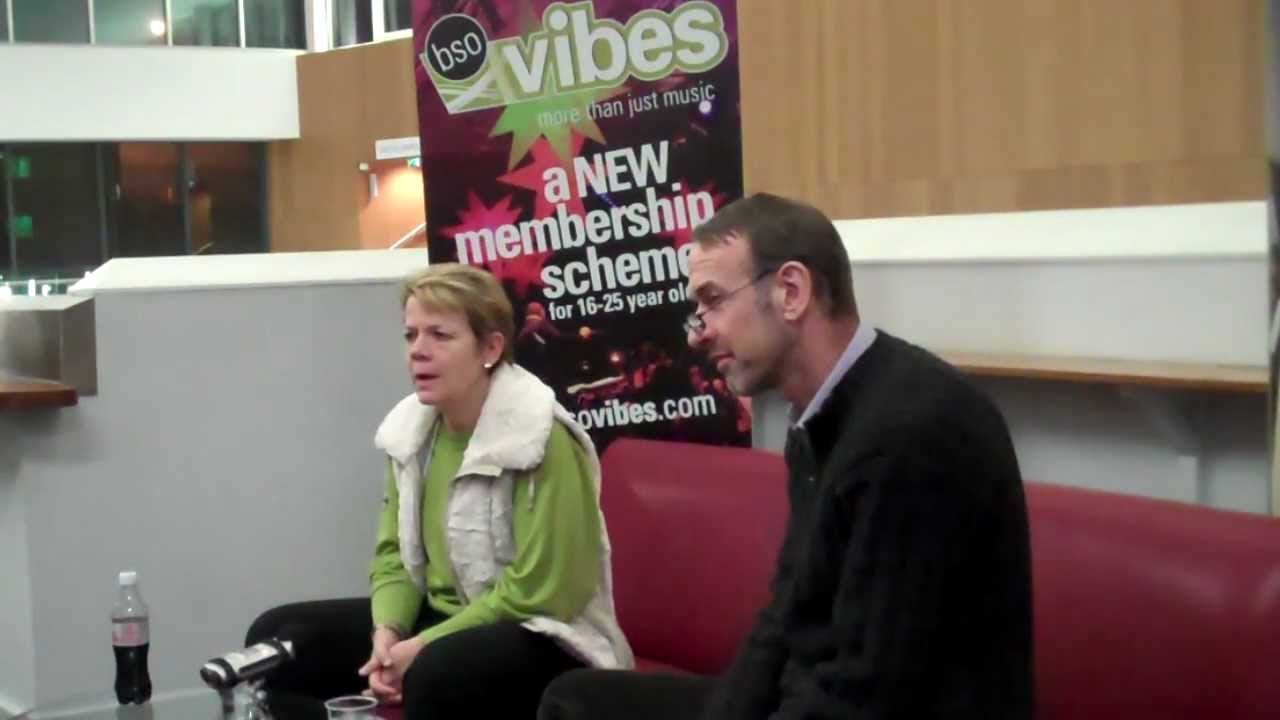 In Baltimore Maryland, beginning in 2007, BSO Music Director Marin Alsop said I’m pleased that the Baltimore Symphony agrees with my philosophy on mentoring and we’re proud to announce a brand a new conducting initiative. We’re collaborating with Peabody Conservatory and the League of American Orchestras in creating a brand new position for a talented young conductor. It’ll be a two year program where the young conductor will conduct the Baltimore Symphony, attend Peabody Conservatory and get real hands on experience. We’ve already selected the first recipient of the award, Joe Young, and so…you’ll see him around the concert hall and you’ll probably even see him on the podium now and then

I want to enable people to feel really connected to composers. That’s one of the reasons I’ve invited so many living composers here, we’re going to speak to them. We have a series called composers in conversation which will be on Wednesday evening and also I want people to feel connected to Beethoven. So I’m really obsessed with these forensic shows, I don’t know if anybody else is. I decided the best way to get to know Beethoven would be to do a forensic autopsy on him and so I’ve invited scientists from Johns Hopkins to join me and we’re going to sort of dissect him, I hate to say that, but dissect Beethoven in front of the audience for two evenings. We’ll have the whole orchestra there, We’re going to play his music, we’re going to analyze what elements lead to his hearing loss, what kind of mental state and just generally what conditions lead to his greatness

Part of my vision is to try to take advantage of all the new technologies we have available to us. Fortunately we’ve already embarked on a brand new recording initiative making records for Naxos and for Sony records. We’re starting a series of pod casts for iTunes and we’re also featured on XM radio

I’ve always wanted to be a conductor, I’ve wanted to be a conductor since I was nine years old, and, my mother and father are both professional musicians. I had to be a musician there was really no choice about that but when my father took me to see Lenard Bernstein conduct the New York Philharmonic when I was I guess nine years old. As soon a I saw him I thought, oh – this is what I want to do, so I never changed my mind from then and I fell in love with him, I fell in love with the idea of conducting. It was a dream I harbored for all those years and it took a while to figure out how to be a conductor actually

And you know as a violin you play one line you know and I mean and it’s really critical but it’s just one line contributing to music that has, you know-one hundred things going on at once and I think for me the idea of being responsible for the architecture, you know-the whole experience the emotional journey the quality of sound the vision the piecing and everything, thats what appealed to me always and I think I was always one of those kids, even if I was bad at a sport was always the captain of the team and I think this idea of galvanizing people and hopefully inspiring them to come together and do their best as a team was something that always appealed to me and thats really what conducting is all about. I think that it’s really important that we feature along side very established well known artists, young talented emerging artists because of course, like with the composers that I’m featuring this year, they were once aspiring composers. Now they’re really the leading composers of the day and the artists that we feature will also be the leading artists of tomorrow and it’s nice I think for our audience and for our musicians to sort of get in on the ground floor as their elevator is rising so to speak

This is definitely the highlight of my career so far having a wonderful time with the musicians of the Baltimore Symphony, we’re going to create something brand new some kind of excitement. We’re trying to bring classical music to everybody, bring it back to where it used to be where it was part of everybody’s lives..it was accessible, it was fun, it was interesting, engaging and we feel that we’re just part of the community, we’re owned by the greater Baltimore community and so we want to be available to everybody so people can access the symphony to what ever degree they want

She was a child star from the Bronx who gained international fame as an Academy Award-winning singer who performed the title tracks in "Flashdance" and "Fame," some of the biggest movie theme songs of the 1980s. nyti.ms/3GOKC5F pic.twitter.com/bHp3hirbpL

The city of Vienna is the focus of @buchbinderpiano's new album for good reason. With culture an important part of the city's mentality, Buchbinder takes the example of the many plaques trumpeting where Beethoven lived and composed!
💿 Order the album now: dgt.link/buchbinder-soi… pic.twitter.com/ReqfSr6G0J

Good morning my Tweethearts! A few pics from Fri ribbon cutting for new ⁦@CityOfBoston⁩ plaza design. Lots more greenery, seating, accessibility! You know it’s a pah-ty when brass band shows up. And I got my Boston cookie💖Luv my city & 99.5! Join us ⁦@CRBClassical⁩🎶 pic.twitter.com/4cejU24AAr

Wow! I just got a Grammy nomination for Best Improvised Jazz Solo for Falling on my 12 Stars album. What an honor! Thank you to my band, Robin Tomchin, Cecile,Don Was, James Farber, Blue Note Records team, my Fans and the Recording Academy
@RecordingAcad @bluenoterecords pic.twitter.com/SEyW221Gwi