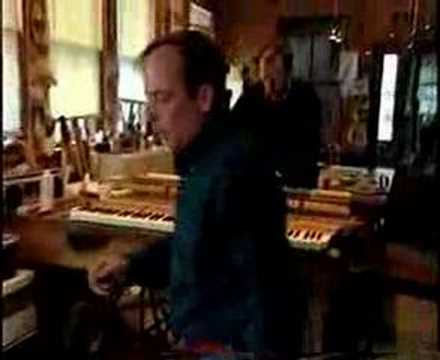 I was fortunate as a young man to be accepted into the North Bennet Street School (NBSS) Boston MA, Piano Technology Program by Bill Garlick the Piano 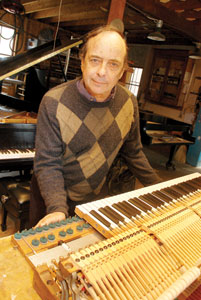 Mr Stanwood, over many years, has placed a great deal of time and effort into his craft career and love for pianos.

Mr Stanwood starts out by saying

My name is David Stanwood, President of Stanwood Piano Innovations.

Our shop is on Martha’s Vineyard, in the town of West Tisbury.
I’ve always had a passion for pianos, always loved pianos.

narration
David Stanwood’s passion for pianos lead him to question why even on some of the worlds best instruments the feel of the keyboard was sometimes inconsistent from note to note.
While training to be a piano technician at Boston’s North Bennet Street School Mr. Stanwood asked what could be done to improve pianos who’s actions didn’t feel right.

Stanwood
And the answer was, well-a – that’s not that easy.
So there really wasn’t an answer. That drove me to experiment and discover.

narration
The science of weights and measures is called Metrology.
Mr Stanwood’s quest lead him to develop a fundamental system and methodology for balancing piano action, something he called “the new touch weight Metrology.”

Stanwood
What was missing in pianos, was a metrology which explains the balance of piano actions in a whole way.

narration
Unlike a violinist who can carry his or her whole instrument on tour, the concert pianist must travel from hall to hall, playing on a variety of instruments, often with inconsistent playing action.

Stanwood
The equality of the mechanism of the piano can either act to support the pianist or it can act as a barrier to their art, and my quest has been to discover now what is the mystery in that mechanic of that keyboard what happens between the musical thought and the finger where it touches the key and the sound that comes out.
There’s a lot of stuff that goes on in this mechanism and that really shouldn’t be an issue for the pianist, they should have a thought and should be able to think it and express it in sound.

narration
The piano keyboard is a system of stepped weights. The hammers at the bass end are larger and heavier than the hammers at the treble end. The pianist expects the keys to feel consistent along the length of the keyboard much as we expect each of the steps in a stair case to be of the same depth and height.

Now a Pianist has the task not only to walk up and down the staircase but they have to dance up and down their stair case and do it artistically and do all these fancy things.

narration
The action for each of a pianos 88 keys acts in a series of movements much like a catapult, where the press of a key begins a rapid series of increasingly magnified movements through the key stick, the repetition or whippen, and the shank eventually catapulting the felt tipped hammer into the string. Engineers refer to this set of connected mechanisms as a folded beam.

Stanwood
..and ten grams out on the end, this would be the measurement of the weight of the hammer, and the way we would measure this in the piano would be taking the part off and actually tipping it and there we have ten point two grams(10.2).

narration
The process of weighing each component of each of the 88 key mechanisms continues with the whippen also known as the repetition.
It is followed by the key stick which is weighed by balancing it at it’s pivot point. This measurement is called the front weight.

narration
Mr Stanwood’s equation of balance is written as

For the key mechanism measured here the formula would be

The primary use of the equation of balance is to fine tune and perfect the front weight, the variable that makes the key invisible to the player.
All of the data collected in the weighing of each of the 88 keys is then entered into the computer. The data is then analyzed to determine whether individual components should be made lighter by trimming or made heavier
by having weights strategically placed to achieve balance.

Stanwood
Now we’re gonna look at the Jordan Hall Piano, (at the computer) This is a Hamburg Steinway D
It’s a Jordan Hall, and this is the weight of the strike weight as from the factory (looking at the computer) and you can see that there’s a big bump, it gets very low here,
This is the ratio that we calculated using the equation of balance.
The next major component is the lead weight, that’s what you have to throw when you play the key and that can be measured by measuring the front weight where you tipped the key on the scale, erst the measurement of the front weight.

We added what’s called a whippen support spring so we use a combination of the lead weight and the spring and you can see that the effect is that we can use much less lead. So now we have a keyboard where the inertial weights (the stepped weights) are very uniform from step to step, no surprises.

The ultimate goal in the piano action is to really make the mechanism disappear, and have the hammers in your fingers – I mean that would be the ultimate goal, just not even think about the fact that there’s five thousand parts in between you and your performance.
You can just feel like you are right to it.
Connected to the hammer, that’s what we’re after here.

She was a child star from the Bronx who gained international fame as an Academy Award-winning singer who performed the title tracks in "Flashdance" and "Fame," some of the biggest movie theme songs of the 1980s. nyti.ms/3GOKC5F pic.twitter.com/bHp3hirbpL

The city of Vienna is the focus of @buchbinderpiano's new album for good reason. With culture an important part of the city's mentality, Buchbinder takes the example of the many plaques trumpeting where Beethoven lived and composed!
💿 Order the album now: dgt.link/buchbinder-soi… pic.twitter.com/ReqfSr6G0J

Good morning my Tweethearts! A few pics from Fri ribbon cutting for new ⁦@CityOfBoston⁩ plaza design. Lots more greenery, seating, accessibility! You know it’s a pah-ty when brass band shows up. And I got my Boston cookie💖Luv my city & 99.5! Join us ⁦@CRBClassical⁩🎶 pic.twitter.com/4cejU24AAr

Wow! I just got a Grammy nomination for Best Improvised Jazz Solo for Falling on my 12 Stars album. What an honor! Thank you to my band, Robin Tomchin, Cecile,Don Was, James Farber, Blue Note Records team, my Fans and the Recording Academy
@RecordingAcad @bluenoterecords pic.twitter.com/SEyW221Gwi